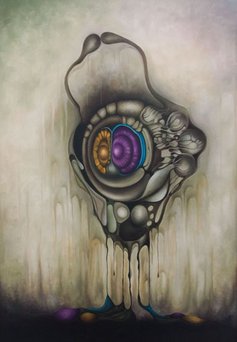 Dreams in horizon is the title that represent Yaqeen's 32 tableaux in which she adopts three main themes , man , life ,and death.

It is clear that three figures only dominated most of Yaqeen's paintings , yet she used her extreme artistic senses in employing them over the surfaces of her paintings to bring out in the end a different image to each . Thus we find the curved land , the colorful sky and the human being cleverly symbolized in each tableau as to reflect a number of realistic thoughts engulfed with surrealistic shade.

At the first look the viewer is taken by the dreamful atmospheres of the fantasy world , however a careful look would soon reveal how near to our daily life Yaqeen's themes are .

The graduation of colors in Yaqeen's paintings have played an integral role in conveying the kind of meaning she aspires added to the reflection of light that will eventually result in forming the horizon . Artist Yaqeen Aldulaimy revealed to Iraq Daily the feeling she poured in her paintings saying , " What bothers me mostly is how to embody the concept of balance in the relation of man and woman.

She needs his strength as much as he needs her tenderness and passion " She illustreated that sometimes the woman appears in her paintings weak and helpless however ; she doesn't consider it as a weak point . Nearly all of the women in Yaqeen's paintings are gazing upwards as if looking for something. "All that we achieved are the out come of the dream, as my women do never stop dreaming. One could seem tired, while the other might look ready to do something. What is really important to me is to unearth the passionate side in the many situations witnessed by a human being," Yageen maintained.

She further symbolizes the concept of eternity and life by drawing figures of people standing on a sliding land as if they are melting with the bottom of the painting. " Eternity is in the sky , while human being and life are mortal like any substance only the spiritual things are apt to remain and immortalize. Through that melting I gave things the aspect of moving.” The artist said .

She concluded saying , "Since ever I started drawing , my fingers adhered to curves and sloping strikes as my eyes couldn't come with geometrical figures as much as with curving and sloping ones . Born in Basra in Iraq . Yaqeen acquired a BA degree in science of chemistry from Baghdad University. She studied ceramics at the Institution of Popular Heritage. She is member of the Iraqi Artists Union and member of the Iraqi Plastic Artists Society .